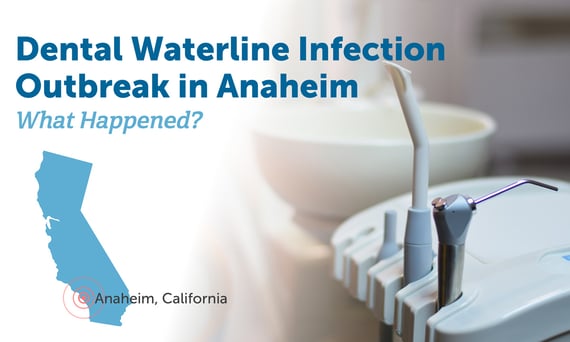 In 2016, a dental unit waterline contamination at a pediatric practice in Anaheim, California led to mycobacterium abscessus infections in at least 71 children.

The practice was part of a 12-office group before being ordered to shut down by the Orange Country department of health after 5 waterline samples came back positive when tested for mycobacterium abscessus. Over the course of a few weeks, dozens of children between the ages of 2 and 11 began showing up to the hospital complaining of facial swelling and pain.

The Face of the OUtbreak, Mimi Morales

Mimi Morales was the 7 year-old who quickly became the face of the outbreak that left 70 patients (98.5% of the 71 confirmed cases) requiring hospitalization and surgery (Singh, et al).

“The doctor said he removed as much bone as he could without disfiguring her,” said Mimi's grandmother ("7 Year-Old Loses").

After a root canal, Mimi developed a fever and her mouth began to swell. An oral surgeon removed part of her jaw bone and Mimi lost permanent teeth. Heavy doses of antibiotics with serious potential side effects usually used for bacteria resistant strains were prescribed to fight her infection for months.

Even after Mimi recovers, she will require significant additional dental work, including bone grafting, to receive her dental implants which will have to wait until she turns 18 years old. 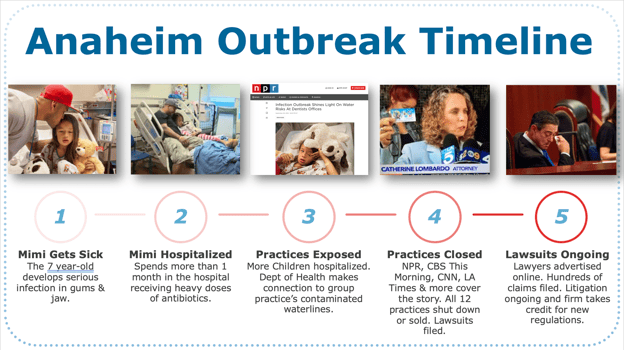 While Anaheim’s outbreak – and it’s counterpart in Atlanta in 2015 – is unusual, it is likely there are many infections that are never linked to dental waterline contamination. The discovery that Anaheim was an outbreak started with a set of fortunate circumstances and a dedicated pediatric doctor.

One weekend over the summer, Dr. Negar Ashouri, a pediatric infectious disease specialist, happened to be on call when one of the first patients came into the hospital. The patient required surgery and eventually lab results revealed a mycobacterium infection.

Up to that time, Dr. Ashouri had never seen such a severe oral infection.

About a month later, Dr. Ashouri just so happened to be on call again, and another young girl came into the hospital with similar symptoms.

When Dr. Ashouri saw the similarities, she called the family of the first patient and started putting the pieces together. Both had undergone procedures at the same practice in Anaheim.

The doctor notified the county health department and a full investigation was launched. More and more children started arriving in the hospital. They were given CT scans, blood tests, surgery, and month's worth of federally regulated intravenous antibiotics originally developed to treat leprosy.

Dr. Ashouri and her colleagues worked overtime. “It reaffirms the reason why we all went into medicine. It all comes down to the kids" ("Most Influential 2016").

“The natural question is how many more cases would have happened if Dr. Ashouri hadn’t recognized this connection?”, said Dr. Matt Zahn, Director of Epidemiology for Orange County’s Health Care Agency ("Most Influential 2016").

Lawyers began advertising on Google and network television seeking families that may have been affected. Hundreds of claims were filed. In January 2019, the Orange County Register reported that there are 150 ongoing lawsuits filed against the practice, with more expected to come.

How Could This Happen?

Most of the time, this question is answered with frustration, and certainly, every dental practice has responsibility to ensure their patients safety.

However, it's important to note that most dental practices have improvements to make in infection prevention.

For example, in 2017, ProEdge conducted the largest real-world treatment efficacy study to date. Cited in the article “Treating & Monitoring Dental Water” by John A. Molinari, PhD and Nancy Dewhirst, BS, RDH, this study of over 22,000 real-world waterline tests found that 31% of treated waterlines still fail to meet the CDC standard of ≤ 500 CFU/mL for safe water. Additionally, 61% of practices had at least one failed waterline.

An effective waterline treatment protocol is necessary to keep the waterline environment free from biofilm so your patients – and your practice – are safe.

The Full Impact of the Outbreak

The practice where the infections occurred was shut down and the others in the group are under new ownership.

The following data is published by the Open Forum Infectious Diseases, Volume 5, and details the full impact of the Anaheim outbreak: 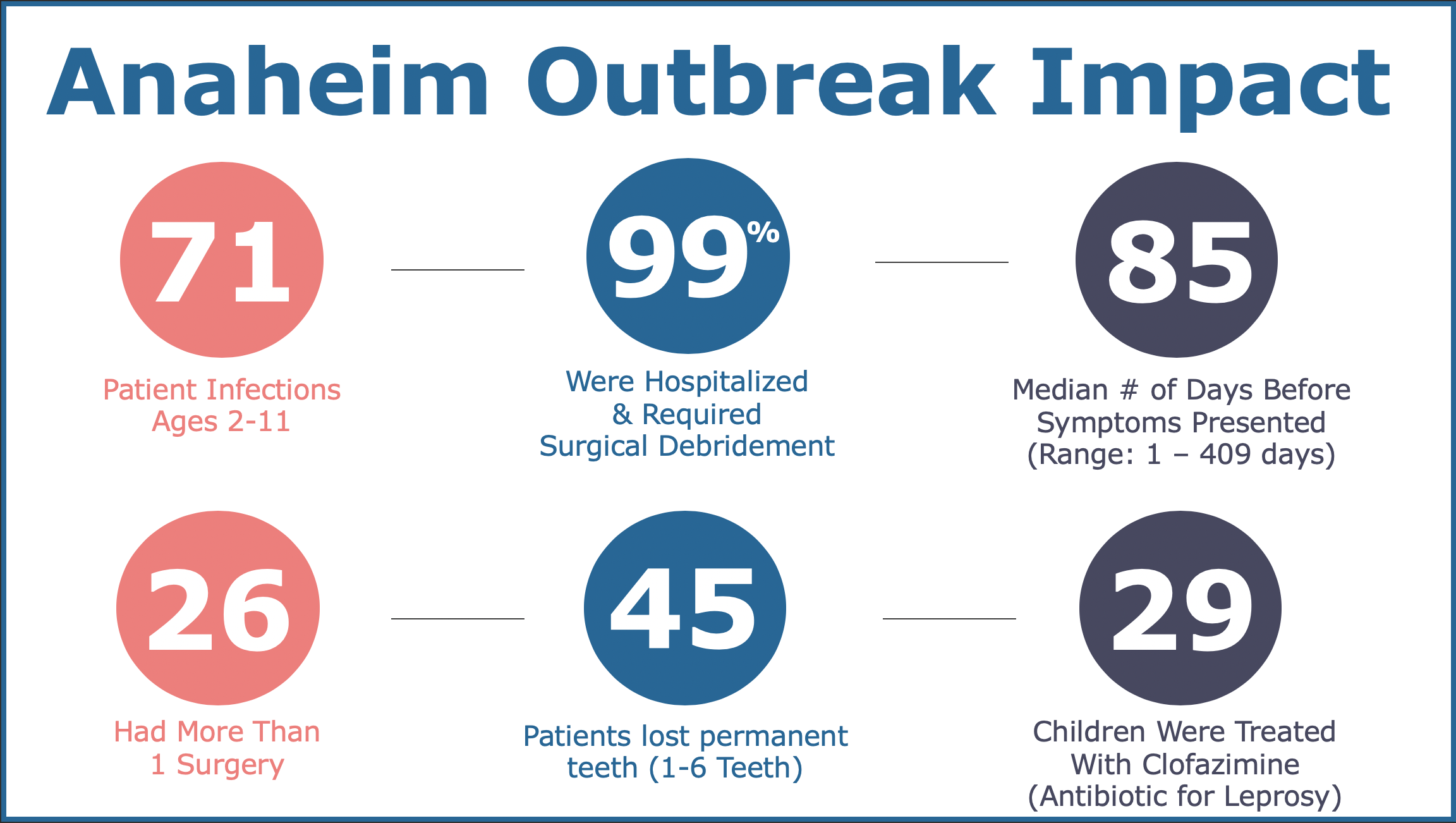 The severity of this situation takes on another level of intensity looking at these numbers. But we all know it intuitively.

Like Anthony Garcia, a father of one of the children infected said, “This should never happen to any family again" ("65 More Families").

Make Sure Your Practice Has Safe Water

While scenarios like this are rare, there are not flukes –  just one year earlier, a similar disaster occurred from contaminated dental water in a Georgia dental clinic with 20 confirmed cases of children who suffered the same trauma as those in California.

We in the dental industry need to ensure the patients sitting in our chairs receive the best care. After all, that’s why they chose your office and it's why we got into this profession.

ProEdge offers free resources to help any practice develop an effective waterline protocol or test their existing one. Click below or call the team @ ProEdge today. 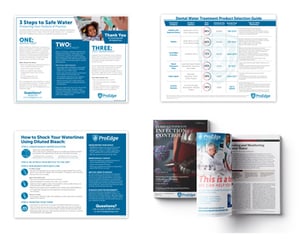 Get started with These Free Resources:

What to do if Infections Are Linked to your practice

As a dental water lab, ProEdge has been a part of other infections linked to dental waterlines that did not receive the kind of news coverage Anaheim's outbreak did. Because of this, we have helped practices when they realize they need to quickly ensure their waterlines are safe moving forward.

If this situation arises, take it seriously and take the following the CDC's recommended precautions:

It is always best to act on the side of caution and get the appropriate stakeholders involved.

ProEdge is able to provide a support role during this process, but the health department must be contacted and your infection control consultant should be involved.

Further Reading on the Anaheim Outbreak:

How To Shock Your Dental Unit Waterlines